There’s not a lot of information revealed yet on what fans can expect out of The Walking Dead Season 9 though some rumors have managed to peak the fandom’s interest.  But one thing that’s certain is that the audience is keen on knowing how Andrew Lincoln’s exit will affect the series, especially the season itself as he is expected to depart halfway through.

While Lincoln’s exit has been on the limelight, he won’t be the only fan-favorite departing from the show as Lauren Cohan is also leaving to star in ABC’s midseason drama Whiskey Cavalier alongside Scott Foley.

In EW’s recent TV fall issue, The Walking Dead’s new showrunner Angela Kang spoke about the leading man’s exit and seemed optimistic that his departure will open up to new possibilities.

“Loss has always been part of the [show],” said Kang. “It gives characters an opportunity to step up in different ways that maybe we haven’t seen. So beyond the responsibility that we feel towards servicing those stories of the wonderful cast that we have staying are engaging and rich and take us in different directions.”

It is still unknown if those directions involve Rick dying. There have been rumors that Rick dies in the hands of The Whisperers who will be the antagonist group of season 9 based loosely on the comics.

The EW issue also had a new still of Norman Reedus’ Daryl. You can check a low-res screen-cap of it out below.

In more TWD news, Scott Gimple recently responded to TVline’s Greg Ausiello regarding fan favorite character Shane’s return and if it would be shown as a vision, ghost or a flashback scene. All Gimple had to say was that Shane’s appearance involves ‘some very cool, very heavy stuff.”

Fans can hope to find out more when The Walking Dead returns to the air on October 7 with season 9. 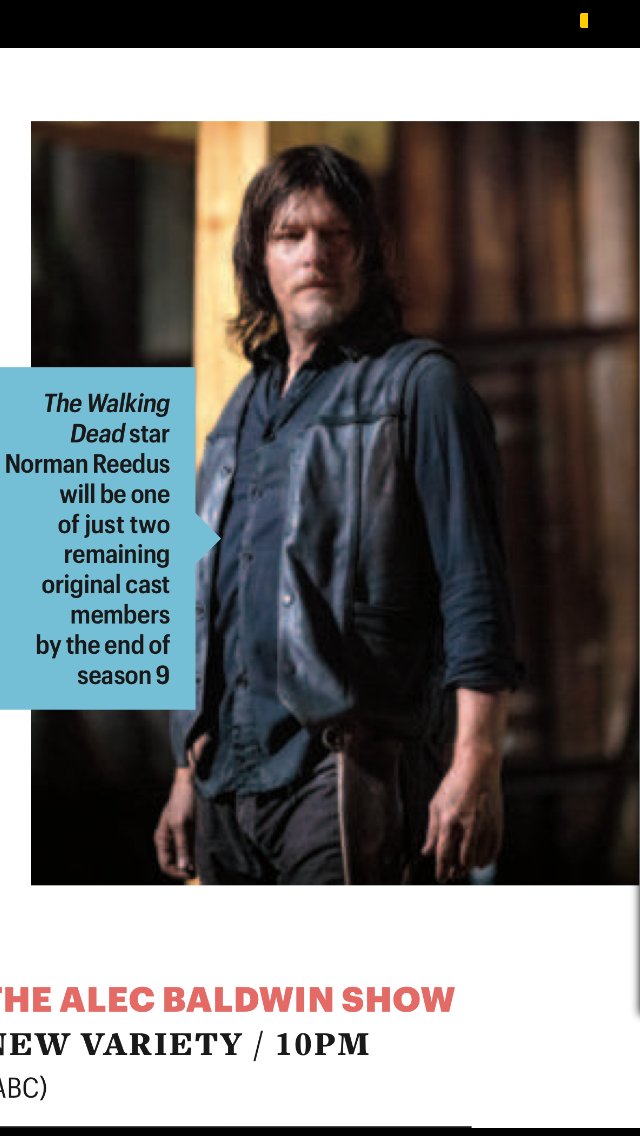 Still of Daryl from The Walking Dead Season 9/ AMC

George R.R. Martin Didn’t Want Game of Thrones To End With Season 8
Disney Plans To Make Shows Based On MCU’s Loki, Scarlet Witch
We use cookies to ensure that we give you the best experience on our website. If you continue to use this site we will assume that you are happy with it.Ok